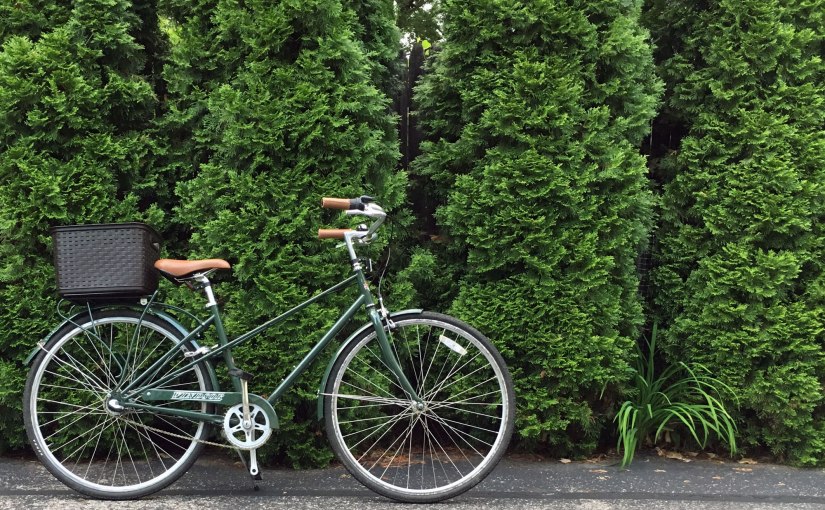 My trek to the grocery store via bicycle was an overambitious endeavor prompted by unusually warm weather, no food, and a lack of car insurance.

For the first time in my adult life I’d forgotten to renew my coverage, which was due on a Sunday, and I was too busy sleeping in and sipping mimosas to bother with things like bodily injury and property damage liability. Then I found myself (sort of) car-less with a naked fridge, and a sister needed to eat.

This is where shit goes south.

Instead of allowing myself the luxury that is delivery and drowning in a Beach Club with too much mayo and extra hot peppers like a normal person, I chose the next most logical option: bike four and a half miles to the hell on earth known as Meijer.

No offense, Meijer, but crowds at peak shopping hours don’t much do it for me. Biking to a grocery establishment post-workout with an empty stomach, apparently, does. According to my boss, I’m a glutton for punishment.

I’m also a glutton for food.

The journey seemed easy enough—mostly residential neighborhoods with plenty of sidewalks, and long stretches of road.

So I saddled up on my steel-framed steed with my basket in tow, and shoved off toward food with some optimism. That optimism, much like my energy and the daylight, faded quickly as I realized the majority of my ride was uphill. I’d just come from the gym where I’d completed enough overhead squats for a lifetime, and my thighs were toast.

The light breeze and mild weather weren’t enough to compensate for my physical distress.

I was over it.

At mile four, I committed to a surgical approach to gathering my goods—an in-and-out plan of attack to avoid a dark ride home. Five minutes in, I found myself shimmying about the produce section with zero regard for time or space, and liberally filling my shopping cart with a week’s worth of groceries.

That snappy pop music is a trap.

I’d completely sacked my strategy, forgotten the impending darkness, and more consequential still, my lack of motor vehicle. It hit me when I scanned the dimming parking lot for an absent black Mini Cooper, and found my bike chained outside the door—I was pedaling this lot home.

You could say this was the beginning of my metaphorical (and soon-to-be literal) plummet downhill.

I strategically (and successfully) stuffed my purchases in my basket and filled my pockets with the stragglers. Then I chugged a protein shake, mounted my green machine, and peddled west with restored confidence. That poor bike was weighed down like an overworked pack mule, and I gave no shits—I just wanted my bed.

I’d worked much too hard for this meal, and the sun was officially gone.

And here we are.

It took about three miles of potholes and uneven sidewalk before the rack holding my groceries snapped off the frame and smashed into my rear fender causing my tire to lock up completely. Cue the terrifying downhill death-skid.

I would’ve preferred a flat tire—a flat tire can roll. A tire beneath violently mangled aluminum and 20 pounds of groceries cannot. Without a tool to remove the basket, the rack, and the fender, that bike was not moving.

Conveniently, I’d broken down in the most unsafe area on my route, without tools, in the dark, by myself. As a small, unaccompanied female, this is not a place you want to find yourself after sunset.

I weighed my options.

In any other situation, calling for help would be the most obvious choice. But the closest help with a vehicle large enough to transport my bike lived 15 minutes away, and that did not include the time spent appropriately dressing and getting to the car before getting to me. I wasn’t leaving my bike, I wasn’t leaving my groceries, and I wasn’t chillin’ on that corner any longer than I had to.

Uber seemed viable, but was quickly axed for time’s sake and the gamble of risking enough trunk space and a willing driver to haul my bike.

I wasn’t dying, so no 911, and running home to get my uninsured car for an emergency pick-up was not an option. The downward trajectory of my luck that evening told me that was a poor life choice.

I had one option left: carry it.

I did the math—my steel-framed cruiser, groceries included, weighed approximately 55 pounds, and according to GPS, I was 1.25 miles from my house. As long as I could successfully lift my bike like a wounded soldier, it was doable.

I squatted between the wheels, looped each hand around a piece of the frame, and lifted the thing to my shoulders. With a few awkward adjustments, it was up—all 55 pounds of it. All 55 goddamn uncomfortable, poorly dispersed pounds.

And so I walked.

As long as I was moving, I felt powerful and safe. But the walk was taxing.

My neck bruised beneath the weight of the bike and dangling groceries, and my shoulders burned from constant strain. My arms lost feeling after 10 minutes, and my legs were torched from the 8-mile ride and squatapalooza hours before. Taking a break increased the risk for an unsuccessful lift, so I pushed.

The most sadistic part of me enjoyed it.

I arrived at my door in 31 minutes with my bike in one piece (sort of), and all of my groceries (thank god). I, on the other hand, was wrecked. In that moment, I could not have been more thankful for my strength. Without it, I wouldn’t have been able to do what I did. My arms, legs, and tenacity saved me.

But I knew I could make it—I’ve seen what this body can do.

I trusted its strength and endurance. I trusted myself to take care. I trusted that if some fool got fresh, he’d feel the weight of that bike on his skull. And that sense of self-reliance was empowering.

This was not the first time the universe has tested my resourcefulness, and it won’t be the last. I’m no stranger to an unfortunate (and often comical) snafu, and I’m a terrible damsel in distress.

I’ve been towed out of a driveway at 1 a.m. because I was stuck in the snow, and my gentleman caller was too high and too asleep to help me. I’ve locked myself out of my own house, and climbed through my kitchen window via a hose rack to avoid peeing my pants.

Sometimes, our only option is ourselves.

In those moments, allow yourself to be your hero.