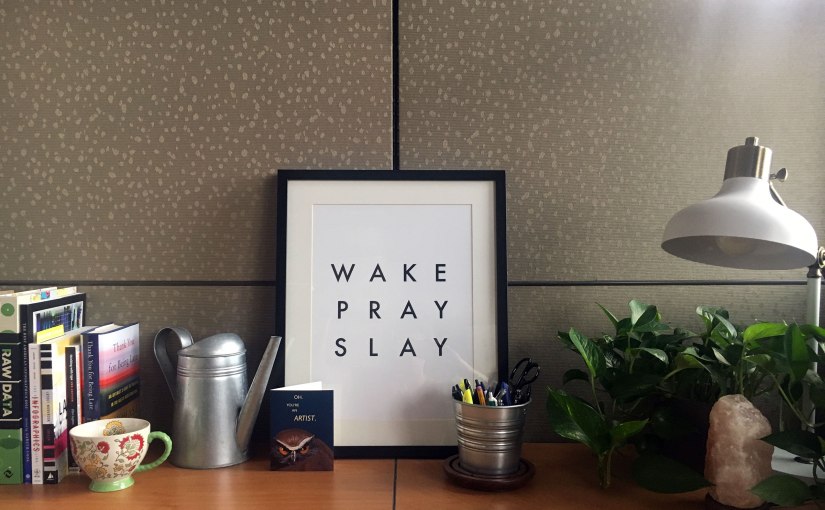 Two years ago, a former colleague slam-dunked a job opening in my inbox, told me to apply, and winked. She quit for the same reasons I needed to, and her gesture was a last-ditch effort to help push me toward an exit while she made her own.

Praise pussy for that woman, for the blessing she bestowed upon me resulted in (spoiler) a new job. And lo! it is good.

The posting called for a senior designer for a public policy firm, which, at the time, was an immediate design boner-killer because no young designer reads “public policy” and thinks, “creative freedom” or “fuck yeah!”

But I wasn’t happy where I was, and it didn’t hurt to try.

The description outlined the need for a candidate that,

“…is passionate about all areas of design, from high-level brand and identity down to the kerning in a footnote. Someone who cares a lot about Michigan and loves knowing their work is supporting the thoughts and ideas that make the state better.”

They wanted a knowledge-seeker with strong communication skills that understood the importance of team work. That’s kind of my shtick. But their website was lackluster, their reports looked dated, and from what I could gather, I wouldn’t be creating the beautiful, innovative advertising campaigns I hoped for. I was convinced that, if offered, taking this role was a death sentence for my creativity.

However, the chance to create content distributed to decision-makers with the power to invoke positive change intrigued me. I wanted my work to matter.

I applied on the last day the firm was accepting applications, 30 minutes before a day-long spa appointment during my vacation on the Gulf of Mexico. I’d completely neglected the task before bolting South, which resulted in a frantic dig through old emails for a current (or mostly current) résumé, and my pumping out an email that started:

“Please accept this email as a cover letter for the senior designer position…; I’m currently vacationing with family out of state and unable to access my personal drive…”

Pro tip: Don’t do that. Unless you’re me, and the rest of that email is really damn compelling. Otherwise, you just look like an unorganized asshole. Which I was.

But I was late for my facial.

I attached my résumé, slapped a link to my portfolio in the email body, and hit send. I had a slim chance, given my approach, but five weeks later I received the call.

In my interview, I discovered the majority of the senior designer’s projects involved formatting content in Microsoft Word.

For those of you outside the industry, it’s difficult to understand my disappointment. Designing anything in Word is the equivalent of asking DaVinci to create a masterpiece on a cocktail napkin and tossing him some crayons. He could do it, I could do it, but it’s not the best tool for the job. And for design professionals, it’s a laughable ask.

Also laughable: I just grouped myself with DaVinci.

I worried I wouldn’t have the chance to flex my design muscles, but it promised a supportive team and room to grow, so I accepted.

When I arrived, I learned I was replacing a woman who had held my role for nearly 14 years. Step into that as a 25-year-old with three years experience and see how many hours you spend crying on a bench outside. In the first eight months, I flooded that motherfucker.

The projects I was asked to complete felt bland, discouraging, and impossible. Basic Word documents, inconsistent staff expectations, and flimsy processes drove me to the bench. But responding to the curiosities of my design peers was a real nut-kicker.

What was I working on? Nothing worthy of the design world, and everything short of my standards. In my eyes, my work was passible, but I wasn’t churning out the projects that earned the respect of my college professors, and I wanted to create more than ‘good.’

Admitting I wasn’t proud of the work I was producing was defeating, and I fought hard to stifle the feeling that, as a designer, I was failing to tap my potential. But my reality was Microsoft Office and generic pie charts.

I stayed because I convinced myself that, despite the firm’s design climate, I had the power to influence change. I wanted to prove I could be a successful designer at a public policy firm.

This is last place I expected to find myself employed, but alas, here I am, two years later, thriving.

It took a moment of feeling like I wasn’t fully tapping my design potential before I could truly appreciate what I do. I am a talented graphic designer, but my superpower is my ability to identify inefficiencies, collaborate with team members, and design solutions that transform the way we work.

During my second year as senior designer, I helped create a more unified production team, and designed and implemented a system to streamline project requests, track project data, and reduce overall staff time related to project submissions. It completely revolutionized the way we work.

I played an integral role in executing our firm’s brand refresh, which required a complete redesign of our visual identity, brand voice, and every piece of collateral our company uses, including a new suite of Microsoft Office templates.

I collaborated with IT to implement and troubleshoot a process for automatically distributing brand assets to employees’ machines to ensure consistency firm-wide.

And I established myself as a design authority.

I stumbled, a lot. But those challenges—those dragons worth slaying—allowed me to better understand myself, my strengths, and my design identity.