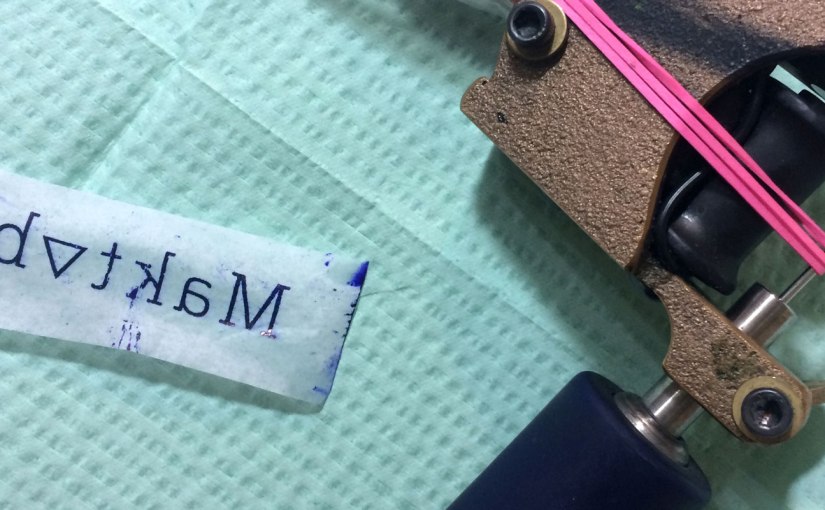 Paulo Coelho’s The Alchemist fell into my queue six weeks ago by the hand of my brother, Logan, and quickly rose to the top of my list of favorites. The 208-page narrative recounts a young boy’s prophetic dream, and his journey across the desert in search of treasure; it’s a story of self-discovery, spirituality, and destiny. Simply written, but deeply moving.

It hit me at the right time.

Swaddled in the bliss of vacation, I buried myself in its prose and resurfaced days later with a light heart, a stirred soul, and a text message to Logan: “We should get matching tattoos.”

Maktub (mak-toob), I suggested, on each of us; an ode to our favorite story. Maybe it was the piña coladas.

He was quick to agree.

Not the response I was expecting; I was mostly joking. After all, I’d (half-heartedly) promised myself time between tattoos to allow for forgetting the pain. And a literary reference tattoo? Oh, cool. But this book struck me, and something about the notion of being bound in ink, as siblings, felt appropriate and worthy of a special exception.

So, as fate had it, I penned the six-letter word on a paper bag from J.Crew, shot a photo to my brother, and without question, we settled on an artist. A quick phone call a few days later landed us an open time slot with Chris Hornus, owner of Royalty Tattooing Parlour and builder of tattoos.

“When you want something, all the universe conspires in helping you to achieve it.”

Our turnaround was lightning.

Soon enough we piled in the MINI, design in hand and Durand-bound for our moment of sibling solidarity. We entered Royalty to a wave of punk and an ocean of flash, and after some necessary housekeeping—introductions, signatures, and explanations—we migrated to the table.

I surprised myself with my lack of hesitation. As a person who finds comfort in thoughtful planning, this act of spontaneity felt oddly cozy. Perhaps it was meant to unfold this way.

“Maktub. You would have to have been born an Arab to understand,” he answered. “But in your language it would be something like ‘it is written.'”

Maktub is a concept of destiny suggesting that all things have been written by one hand. An Islamic notion that everything we experience ensues because it is willed by Allah. Or simpler still, a one-word euphemism for “everything happens for a reason.”

Every event, emotion, action (both positive and negative) that peppers our lives is meant for a specific purpose. And it’s about doing good, taking risks, and pursuing dreams to honor that purpose. It’s our reminder to be more fearless.

“Tell your heart that the fear of suffering is worse than the suffering itself. And that no heart has ever suffered when it goes in search of its dreams, because every second of the search is a second’s encounter with God and with eternity.”

So we inked it on our bodies.

Logan’s Maktub is marked with a triangle for the ‘a’; the alchemical symbol for fire, and symbolically, used to represent ‘male.’ His tattoo rests on his left thigh, just a few inches above his knee. A bold choice, according to our mother. 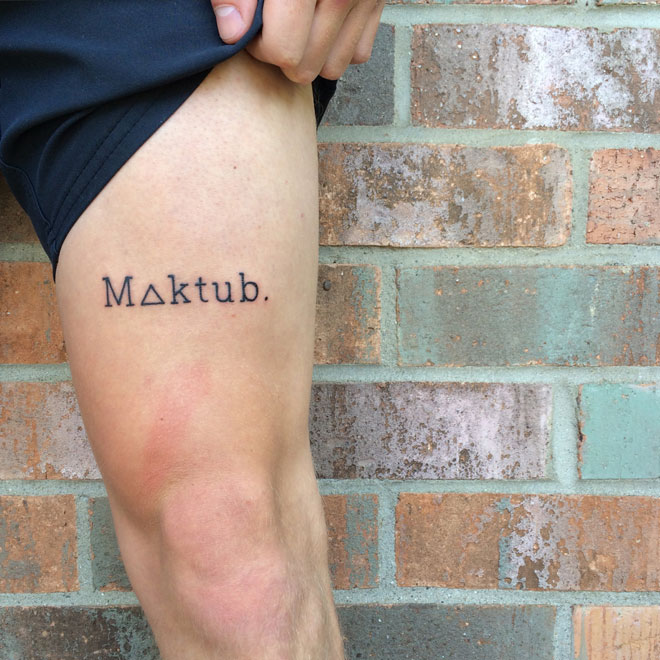 In contrast, my Maktub is marked with an inverted triangle for the ‘u’; the alchemical symbol for water, and symbolically, used to represent ‘female.’ My tattoo rests on my ribcage on the right side of my body; the side more closely associated with a higher power.

Layer our triangles and we make a hexagram; the alchemical symbol for the elements, the union of male and female, and the intertwining of the spiritual and the physical. All is one; a central theme of the novel.

A symbol of our bond.

The five minutes spent on the table proffered nothing particularly noteworthy; sharp, fleeting pain, light-hearted stories, and a few chuckles. What followed was far more profound.

Upon exiting the shop, I was flooded with pride knowing that the young man next to me, inked and bandaged as I was, was born too from my source. That this compassionate, deep-thinking, good-doer is my blood. I felt more united, as if by sharing an idea and its mark, Logan and I somehow acquired a greater understanding of each other as siblings, and as people.

“That’s what alchemists do. They show that, when we strive to become better than we are, everything around us becomes better, too.”

It was powerful, like a cosmic shift in the realm of siblingdom. Like I’d inhaled all of the good in the world, and it exhaled in response.

We hopped in the car, freshly inked and full of life, and I smiled knowing this precious gift would always remain by my side. In writing, and otherwise. Then we turned our journey eastward, and set off towards home to show our parents what we’d written.